Nearly five years ago as I drove my SUV from Reno to South Lake Tahoe to cover the aftermath of the Angora Fire for a Reno magazine, the farthest thing from my mind was the vegetation.

My photographer and I were assigned to interview residents and bring back a firsthand report on the devastation that we had only heard or read about in Reno.

As we edged our car into the long line of returning evacuees, we accepted rubber gloves and masks from one of the many volunteers at one of the checkpoints, not knowing exactly how and if we would use them.

It didn’t take long before we realized the masks were important gear as we entered what looked very much like what I expect a war zone may look, including the shell-shocked expressions on many of the faces of the people inspecting their once pristine property.

Smoke streamed lazily upward as if it were escaping from unseen vents drilled into Mother Earth, making the air unpleasant enough that we decided to wear the masks, like many of the returnees. 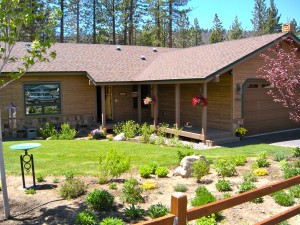 Houses in the Angora burn area were featured on a 2010 home tour. Photos/LTN

Some still-smoking trees stood but no underbrush was visible. In the place of the once heavily forested and landscaped yards were the bodies of non-recognizable cars resting on their frames along with melted bicycles and shards of glass and pottery strewn about.

Now, though, the tables have turned and because of the grit and tenacity of the returned residents, houses have popped up, albeit with little or no visible vegetation. Trees are widely spaced, many with scarred, blackened burn marks snaking up the tree meeting greenery about two-thirds of the way up.

The houses stand naked against the landscape where once grew a lush, mountain forest, where the trees would act as shields and wind screens protecting the privacy of those who live there.

According to Rita Mustatia, silviculturist (a person who looks after trees in the forest) with the U.S. Forest Service, the expression devastation is a misnomer. “I would use the word devastating in reference to the homes that were lost and lives that were changed because of the fire, but not to the forest itself,” she said.

“Fire in the forest is a natural thing and depending on factors such as location, climate, forest type, fire or some other disturbance, [fire] is needed for vegetation, including trees, to exist as part of a healthy functioning ecosystem,” Mustatia told Lake Tahoe News. “Disturbances such as fire eliminate competition between trees by reducing density and creating openings for regeneration.”

However, Mustatia said, most of the Angora Fire burned at high intensities leaving vast areas of little to no vegetation including trees. But about 40 percent of the fire burned at low to moderate intensities, she said, resulting in still living trees and some surviving vegetation. 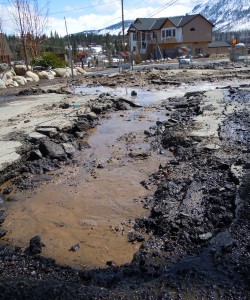 The high water table had roads in the burn area undriveable in 2011.

Some of these trees have subsequently died because of the damage caused during the fire as well as insects that have attacked them. But, Mustatia said, most of the survivor trees are healthy today.

“In some areas where the fire burned,” she continued, “it stayed on the ground as a surface fire resulting in mortality, mainly in smaller, shade-tolerant trees. The Jeffery pine, with its fire-adaptive traits, survived for the most part, resulting in a relatively healthy, post-fire condition. In other areas, where there was heavy fuel loading, the fire burned on the surface as well as through the crowns.”

Susie Kocher, natural resources advisor for the UC Extension Service, agreed with Mustatia. “Some forests are set up to burn every few years, like the Yellowstone fire in the 1980s.”

She said forests in the Lake Tahoe Basin are used to frequent, low intensity fire, but that has not been happening. “Now we have a high density of fuels and trees; consequently, we now have high intensity fires over a larger area killing a large number of trees.

“Part of it is that we’re good at putting out forest fires. But we kind of have a perfect storm in a way,” she said, attributing climate change and less snowpack to a longer fire season.

The question now for homeowners is, according to Kocher, do they want a forest or do they want a shrub field? “If you leave the forest that is located in a south-facing area on its own, not a lot of trees will come back soon — for about 60 years.”

Kocher stated the obvious: the Angora Fire killed a lot of trees in a large area. “There are no naturally, regrowing trees; there’s no seed source because there are no trees. If you want a forest, you need to replant or wait 60 or 70 years.”

She said areas without what she called “treatment” will see fire adaptive shrubs return; plants such as manzanita and white thorn. “And yes, the mushrooms are back, along with lupine and other wild flowers,” Kocher said. “After a wildfire, it’s a great time to collect mushrooms.”

But along with the good plants, invasive species like bull thistle make themselves at home too.

Homeowner Tony Colombo, who lives on Mount Olympia Circle, in a large, green, newly rebuilt Victorian, is angry about the fire for several reasons, not the least of which is his inability to re-establish his landscaping.

Colombo, and his wife, Tara Brennan, lost not only their home to the Angora Fire, but also all of the naturally occurring evergreens and vegetation that made their yard beautiful. “The soil was burned and contaminated,” he said. “And two-thirds of my new trees and shrubbery have died.”

Blaming the high water table in his area on his inability to grow anything except lawn, Colombo said the water on his property is so high in every month except during the summer, it is literally drowning his new trees.

Colombo’s high degree of frustration boils over as he talks. 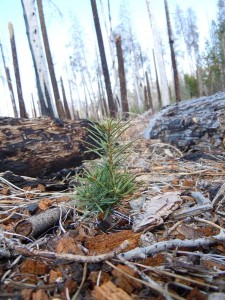 Natural regrowth in May 2012 near the ignition point of the Angora Fire.

“I’ve spent $45,000 of my own money for landscaping. Now we need a hydrologist out here. I don’t have the money for a professional landscaper, so we’re doing it ourselves. It seems nobody wants to address the water problem.

“The conundrum is now it’s really windy because there are no trees. When it’s hot, it’s barren, but in the winter, during rain and snow storms it floods. The water doesn’t sink into the ground.”

Enter John Fellowes, the owner of Aspen Hollow Landscape Nursery, who concurs. Yes, there is a high water table in some of the area where the Angora Fire burned. And, yes, now it’s windy and presents somewhat of a barren landscape.

“Myself and a few others have pointed out that this area is full of water. It sits on a glacial moraine — Angora Ridge. Springs come out of the mountain from the glaciers. The reason it never showed up in the past is because the lodge pole pine was as thick as hair on a dog’s back. There was a mix of about 80 percent lodge pole, with the rest being pine and a mix of incense cedar, white fir and Jeffery pine.”

Fellowes said he has concluded that in year’s past there were aspens and willows in the area, but over the years pines, the tree of choice by homeowners, have slowly replaced them. He said before the fire, these thick stands of pines made good use of the water coming out of the mountain, mitigating the high water problem.

Now that they’re gone, the water is back, playing havoc with some of the new gardens and especially the trees, although high water doesn’t seem to be a universal problem throughout the entire subdivision.

“My theory,” Fellowes said, “is the whole site, except for a few areas, should be replanted in a more riparian fashion. If willow and aspen had been planted [directly after the fire], they would have gotten started, made habitat and screens for people’s houses. Then, at a certain rate, the evergreens would have come back naturally.

“Unfortunately, the Forest Service planted most of what had already burned, probably conifers. If they’re dry, they won’t grow and if they’re wet, they get root rot and die. In the Gondola Fire (near Heavenly), they did the exact same thing and had 100 percent mortality — there was no resource to hand water [the new trees].”

Fellowes said he believes aspen and willows should have been planted where the natural water sites are, instead of the evergreens. He added that the Forest Service is now looking at using other species of trees.

Another problem at the Angora site is a lack of good fill dirt in which to grow healthy plants. To rid the area of hazardous material caused by the fire, nearly everything natural was removed from the burn sites.

“The contractors dug too deep and too wide. They were overly zealous. They took at least 50 percent of the topsoil and in many cases, 100 percent. Our problem is that fill dirt and good soil needs to be brought in; however, TRPA frowns on that.

“You couldn’t mimic an old natural site if you wanted to. Natural things like bitterbrush, manzanita and white thorn aren’t what people want. They don’t appreciate that they’re evergreen. You need everything to grow in the forest so you can trap the matter and assist the tree seedlings to grow.

“It’s extremely difficult to grow things now and I’m proud of the people who’ve persevered. Some have become apathetic and some have moved away. Some have been able to pull it off.”

Unlike Colombo, Lisa and Joe McAvoy were able to secure professional help to assist them with their landscaping issues. Fellowes was their man.

The McAvoys spent untold hours rebuilding their home, although not on their original lot. The result is an attractive craftsman style bungalow built and designed by them with a little help from their friends. But as the McAvoys said, the sweat equity was worth it; they knew what they were getting and got exactly what they wanted.

Yes, there is a high water table now, Joe McAvoy said, adding that before the fire, high water wasn’t what he worried about. But in order to alleviate the problem, they innovated as they went along.

“We have a dry creek bed that diverts a lot of water from our house,” he said. “We poured a curb around the foundation to divert water and waterproofed the foundation. We also have French drains.”

With Fellowes’ assistance, they augmented their soil and because of the steep street in front of their home, did a lot of water channeling. “We knew it was going to be a moonscape, so we worked hard to make it beautiful.”

So beautiful in fact, that the McAvoys’ home will be featured on the Lake Tahoe Historical Society’s annual garden tour to commemorate the fifth anniversary of the Angora Fire. The tour is July 29.