To some, Cliff Swallows are a blessing. To others, they are a cause.

There are three species of swallows in Tahoe: Cliff, Barn and Tree.

The one swallow I will be talking about is the Cliff Swallow. People have called them the Mud Birds because they build their nest from mud. It is amazing to watch them build the nest with one little ball of mud at a time. They are busy little birds and can have the nest finished on one day.

Once the nest is completed, it is illegal to knock down the nest, either by hand, or by washing it down with water.

In the United States, all swallows are classified under the Migratory Swallow Treaty Act of 1918 s migratory insectivorous birds, which means swallow are federally protected birds.

Swallows eat mosquitoes. Lots of mosquitoes. Mosquitoes are the most disease carrying insect in the world.

Cliff Swallows make their mud nest under eaves of buildings.

I received a call from a young mother complaining about the swallows making a big mess. She said that there were about 16 mud nests on one side of her house and wanted to get rid of them. The swallows were making a big mess on the sidewalk below, because, when the little baby swallows have to “go pooh”, they turn around and stick their bottoms out the opening. This is what keeps their nest clean. 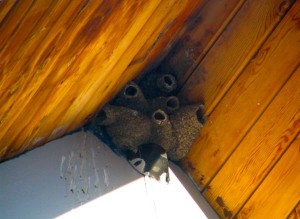 Cliff Swallow nests at the top of the A-frame at Lake Tahoe Airport. Photo/LTWC

I explained to the lady that they are protected under federal law because they are insectivorous. Our tax dollars were used to fund a study to find out that a Cliff Swallow can eat up to 1,000 mosquitoes in a day — per bird. The woman paused and then admitted that she has not had to put on mosquito repellent on her kids. In fact, she said, they hadn’t had any mosquitoes around when they were outside.

I explained the droppings are easy to wash off with a hose and when all the babies leave the nest, then she can knock or hose down the nest.

Her whole attitude changed. She said the Cliff Swallows were welcomed at her home.

Last week, I got a notice from the California Department of Public Health about West Nile Virus, which is carried by mosquitoes which bite a sick bird or animal. (You cannot get virus from the dead bird or animal, but only by the mosquito who bit it.) Since the best mosquito hunters are swallows (during the day) and bats (at night), we all should do what we can to protect both.

April 22-28 was West Nile Virus Awareness Week. To date, there have been 3,146 WNV human cases in California, which led to 110 deaths. Last year, 2,497 birds were tested, of which 28 percent tested positive for WNV. 108 dead tree squirrels were tested with 22 percent positive.

So, now is the time to walk around your house and empty any containers that have filled with melted snow or rain water so you will not be breeding mosquitoes.

Remember, you cannot get WNV from the dead bird. Only from the mosquito.