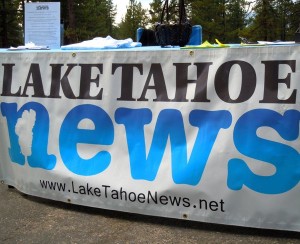 May is 31 tidbits about Lake Tahoe News month.

Lake Tahoe News is collecting names of people for our special NEWS Team. Being part of the club means an opportunity to win prizes.

People have become part of the team by entering contests and donating money at select times. This is another one of those times. As we’ve been telling you all month in these tidbits, we are looking for paid subscribers (click on the link for details) in our quest to become an adjudicated publication. Everyone who signs up this month as a paid subscriber is automatically in the running for one of two Dirk Yuricich photographs.

All paid subscribers – no matter when you become one – will automatically be part of the NEWS Team.

Being part of the NEWS Team in 2011 meant a chance to win tickets to last July’s celebrity golf tournament, November’s Soroptimist wine tasting and December’s Festival of Trees and Lights.

In addition to the photographs, in June we’re having a promotion to win a copy of the just released “Tahoe Blues” published by Bona Fide Books in Meyers and later in the year we have tickets to a Giants game in September that need to find a home. Those contests will be open to everyone on the NEWS Team.

And there are bound to be other goodies for NEWS Team members as the year progresses. What are you waiting for? Become a paid subscriber today.