Now I understand why “Women at Ground Zero: Stories of Courage and Compassion” cannot be read all at once. It is so emotionally charged that it requires the reader to pause long enough to digest the words on the page. 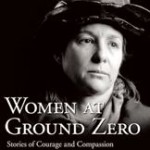 But at the same it’s one of those books you don’t want to put down because it is so gripping.

Authors Susan Hagen and Mary Carouba embarked on a journey to New York City just after terrorists destroyed the Twin Towers Sept. 11, 2001. Their frustration with seeing no women rescue workers on television or in other news accounts led the Californians to search these women out.

The book is about 33 women; including three who died in the attacks. They are firefighters, police officers, emergency medical technicians and therapists. It’s not that their stories are more important than men’s. It’s that until Hagen and Carouba came around no one was talking about the women. The media and politicians focused on the men.

But this is not a book for women. It’s for everyone who cares about what happened that day. It also puts a more human touch on the tragedy that I had not connected with before.

For someone like myself who was out of the country at the time of attacks, the book offered insight into this event on 9/11 and the months afterward that I was not aware of.

I learned the EMTs not connected to the New York City Fire Department were not given the same benefits as those who are employees. I learned about the police department’s evidence department and the heartache of body parts coming in – like a hand with a wedding ring.

I winced as I read. Tears welled up. Anger – though I’m not entirely sure whom it was directed at – filled me. But overall I smiled when I finished the book and had a bit of time to reflect on what I had read.

The authors taking the initiative to research and write the book impressed me. But mostly I felt inspired by these women’s stories.

Hagen and Carouba were on the South Shore in September 2010 to give a talk – which was funny and poignant at the same time.

Although the book first came out in 2002, a 10th anniversary release of “Women at Ground Zero” is out. More information about the authors is on their website.