Rounding the corner en route to the Duke Theatre at Lake Tahoe Community College on Sunday, I walked into a sea of tiny American flags, 2,977 of them to be exact. One for each victim of the attacks. 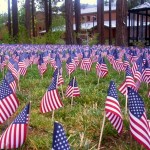 Each flag represents one of the 2,977 people who died at the World Trade Center. Photos/Jessie Marchesseau

In commemoration of the 10th anniversary of 9/11, LTCC presented The 9/11 Project. The event, which consisted of a theatrical presentation, a panel discussion, and a special commemoration and reception, was not only to pay tribute to those who died that day, but also to celebrate local public safety personnel.

“I wanted to honor and remember the victims of 9/11 and morph it into something a little more hopeful,” Susan Boulanger, director of theater arts at LTCC, said.

Girl Scouts wearing sashes handed out programs at the door and asked for donations for the South Lake Tahoe Search and Rescue. The local Boy Scout troops had placed the nearly 3,000 miniature flags into the ground. Most of the Scouts did not look old enough to remember that day in 2001, some of them were probably not even born yet.

The Duke Theatre, which holds 190 people, was packed. Some attendees were forced to stand in the walkways. As the lights went down, 18 actors dressed in black took their places on stage in front of 18 chairs. Seeing them standing there, somber, on a stage of all black, a firefighter uniform and hats from various public service departments displayed in the rear corner of the stage, it was apparent there would be no singing and dancing in this play.

Boulanger chose to do a collection of monologues from two plays for the 9/11 presentation. Seventeen actors would be reading from “With their eyes – September 11th: The view from a high school at Ground Zero,” a series of real-life accounts of faculty, staff and students at Stuyvesant High School, located just four blocks from the World Trade Center. The 18th actor would perform excerpts from “The guys,” a play based on a true story about a New York City fire captain who lost eight of his men in the tragedy, and is then faced with the task of finding the words to remember each of them.

Before a syllable was even spoken on stage, I felt the lump forming in my throat and the tears beginning to well in my eyes. A woman in front of me pulled a tissue from her purse. Just the thought of that day brings about myriad emotions for many of us. 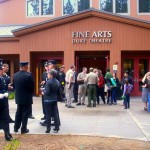 The performance was dramatic. Not a giggle or a snicker in the house. Each oration was a reminder of the real people affected that day, not mythical heroes or ghosts, but ordinary people whose lives would never be the same.

“We tend to forget that they’re human beings,” Boulanger said. “We put heroes on a pedestal.”

She said she chose this particular set of monologues to remind us all of that.

After the theatrical presentation, a panel of seven law enforcement officers, firefighters and military veterans took their place on stage to share how the events of 9/11 affected each of them personally and their professions. The audience was also encouraged to pose their own questions to the group.

South Lake Tahoe Police Chief Brian Uhler said it was an honor to be asked to be part of the panel. “I’m glad that people are still paying attention, and we haven’t become numb to the events of 9/11,” he said. 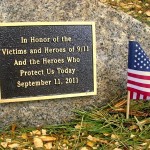 Due to weather, the commemoration and reception that had been slated to follow at the Ledbetter Terrace was moved into the theater. Boulanger announced the planting of two crab-apple trees in the terrace along with a plaque reading “In Honor of the Heroes and Victims of 9/11 And the Heroes Who Protect Us Today September 11, 2011.” As she gave thanks to our public service personnel, the audience offered a standing ovation.

“I wasn’t there when it happened, and I couldn’t do anything then,” Joanie San Agustin, one of the actors, said after the performance. “This was a really great way to pay tribute to those who gave their lives and those who lost their lives.”