I never doubted Martin Hollay’s life would be worthy of a book. From the little I know about him, he is someone I could sit with for hours. He is captivating and engaging every time I’m around him.

I wasn’t able to make it to his 90th birthday party last fall, where I could have picked up his autobiography. I just got the copy I had ordered last month. I read “I was so Lucky: The Life of Martin Hollay, As Told to Tom McGowan” in two days. 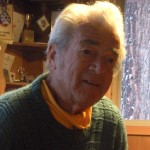 It’s the “as told to” part that is so unfortunate. I don’t know McGowan other than from the book that says he’s an investment advisor and this is his first foray into the book world. The men are friends.

I haven’t asked Hollay why he wanted the book published. I could come up with enough good reasons. But I can’t come up with any for having it written the way it was.

And that’s the problem.

As interesting as this Hungarian skier who probably knows as much about Heavenly Mountain Resort and the 1960 Squaw Valley Olympics as anyone alive does, the book falls a bit flat.

If I didn’t know Hollay and much of his story, I would have stopped reading – and the book is only 94 pages. It’s written in Q&A format. This doesn’t work for a book.

Clearly from the book McGowan and Hollay are old friends. That allows McGowan some insight some interviewers wouldn’t have. But not being an interviewer by trade showed because of the lack of follow up questions, the original questions and the flow of the book.

The editor in me wants to know if there are tapes of the interviews, to flush out the holes in the story, to add depth to this human being who is that rare gem of a gentleman, athlete, lady’s man, family man, immigrant, war hero – oh, and one heck of a cross country and downhill skier to this day. Hollay deserves a more comprehensive book to be written about him.

Yes, I learned some things about Hollay that I didn’t know. But the book left me wanting to know more.

Still, for anyone who wants a glimpse into the early days of skiing at Lake Tahoe, especially at Heavenly, this book is worth reading. And for anyone who wants to delve into the human interest aspect of man born in Hungary, who fights in World War II, is a POW, immigrates to the United States with a wife and young daughter, and then becomes an architect of sorts of Heavenly resort, then this is a must read.