With the centennial of naval aviation in 2011, preparations are under way to commemorate this event. South Lake Tahoe may be part of those of festivities.

The Navy asked Lake of the Sky Air Show officials to apply to be one of the 25 sites to host a celebration next year. Word should come in March if South Lake Tahoe has been selected. 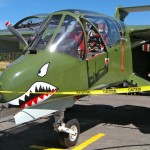 Planes of all kinds come to the annual Lake of the Sky Air Show. Photo/Kathryn Reed

Rick Jenkins, who heads the volunteer committee that puts on the annual air show, said this would be huge for the South Shore. Admirals, a Navy squadron and more would be part of the spectacle. The monetary benefits could be substantial as well as the media exposure.

For now, though, the committee is focused on Aug. 28. That is the date of this year’s 21st annual Lake in the Sky Air Show.

Even though it is months away, every month the committee meets at Lake Tahoe Airport in order to pull off the event that can attract 10,000 people. Volunteers get two months off between wrapping up the last show and beginning work on the next one.

On Wednesday night the 14 people gathered at the table tackled a three-page agenda.

“They are concerned about security. They have never landed anywhere other than a military base,” Jenkins said of the EA-18 Growler. This electric plane has been part of the military fleet since August.

Discussions centered on what type of 24-hour security could be made available.

Talks are ongoing about having a C-5 transport aircraft do a flyover. There’s one at Travis Air Force Base.

The MV-22 Osprey, which flies like a plane and lands like a helicopter, may come to the show. A squadron is based in Miramar.

On the tarmac each year are planes of all sizes. Some are one-seaters, other can haul several tanks or other military vehicles. Some are privately owned, some the taxpayers of the United States have paid for.

At the most recent planning session, it was discussed that local law enforcement will be returning. New this year is the possibility of the Douglas County bomb squad using its high-pressure air tool to blow things up.

“Absent an emergency, these guys love to bring their toys out,” Lt. Les Lovell of the El Dorado County Sheriff’s Department said of all law enforcement. Lovell is a member of the committee.

K-9 demonstrations are also part of the fun. So are a pancake breakfast, 5K run and motorcycle display.

Coming up with a sky diving demonstration is still being worked on.

As with most events, much of the minutia that must be attended to happens at meetings like the one Wednesday night. It means discussing portable toilets, assigning someone to talk to Caltrans about verbiage on reader boards, attracting sponsors, discussing entertainment beyond the aircraft and the three acrobatic pilots, where handicapped parking should be, and that it will cost $5 to walk-in to the all day show or $15 per car.

For more information about the air show, click here.