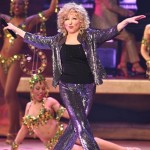 LAS VEGAS — She still has it.

Most women can only hope to have their act together in their 60s like the graceful, energetic Divine Miss M.

“Las Vegas, you look divine,” Bette Midler belts out to another near sold-out show on a hot Vegas night. She could have been looking in a mirror.

Her voice is almost as rich as it was in her prime. Her enthusiasm has not diminished from the first time I saw her in 1990 in San Diego — in a much smaller venue.

The superstar singer and actress with four Grammy’s and an Academy Award nomination is at it again at Caesars Palace’s Colosseum in “The Showgirl Must Go On”. She will have put on 400 shows by the time her two-year contract expires in February.

This 4,300-seat mega showroom originally built for Canadian singer Celine Dion is a tribute to what a world-class stage ought to look like.

Midler’s show is part Vaudeville, part concert and a little bit of her trademark raunchy humor. For those who have followed Midler through they years, this show is vintage Midler and never disappoints — except for it only being 90 minutes.

It opens with a video of a tornado blowing through a mountain of Louis Vuitton luggage weighing about 2,200 pounds. She is a storm to be reckoned with.

“I’m exhausted. That’s what happens when you do your own singing,” Midler admits while sprawled on the floor.

“Thirty years ago, the audiences were on drugs. Now I’m on medication. Twitter, twatter. Everything’s going so fast Midler muses.

Midler has been at this song-dance-comedy routine for about four decades. She started her career in a New York bathhouse with pianist-singer Barry Manilow accompanying her. The two teamed up again years later for a collection of songs as a tribute to jazz singer Rosemary Clooney. Ironically, he was playing across the street at the Las Vegas Hilton.

Midler has never forgotten her roots, asking the audience where the gays are. They weren’t shy about letting her know they were in the house.

The Hawaii native illustrated her upbringing by pulling out a ukulele during one of her encore performances to sing her trademark number “Friends.”

Devoted fans could recite more than one signature song from Midler, who blanketed the 1980s and ’90s with hits from her depiction of Janis Joplin in “The Rose” to “Wing Beneath My Wings,” a song about friendship from the tear-jerker film “Beaches” with Barbara Hershey.

But the true sense of Midler’s distinguishable traits comes out in her onstage characters that have survived an industry prone to an insatiable desire for stars to reinvent themselves. Sophie Tucker, the infamous star of her middle-aged trailer trash jokes, lives beyond campy backyard parties to take center stage at Caesars Palace.

Not many performers would have the cajones to roll out in a wheelchair or come in on a crane hook dressed like the mermaid Delores Delago.

Midler may be aging, but she’s still hip and trendy, making occasional references to current events. Amid 132 costume changes (with Midler in six of them), she compares the demise of Fannie Mae to the temptations of the Las Vegas Strip.

Only as Midler could deliver, it was a no-holds-barred evening filled with the “Caesar salad” showgirls, for whom Midler can’t resist remarking on their 100 percent natural breasts. In full mermaid fins, the showgirls join Midler in a New York Rockettes-style leg extension.

Midler is able to transcend the times, her characters and the surroundings.

Her philanthropic work extends from a garden in New York to South Lake Tahoe, where she and Bill Harrah financed the first alternative birthing room at Barton Memorial Hospital in the early 1980s. Within the first few years, hospital admissions surpassed 4,000 with 500 babies born annually.

How fitting the showgirl returns to a Harrah’s property.

Other things to know:

“The Showgirl Must Go On” plays until February 2010 at the Colosseum at Caesars Palace, Las Vegas. Midler et al are scheduled Oct. 14-Nov. 15 and Dec. 30-Jan. 31. Cher and Elton John fill most breaks.

The recently renovated 540-room Forum Tower has already hosted dignitaries and became the inspiration for the 2009 movie “The Hangover,” which was set in Las Vegas.

Susan Wood is a freelance writer based in South Lake Tahoe. She may be reached at copysue1@yahoo.com.